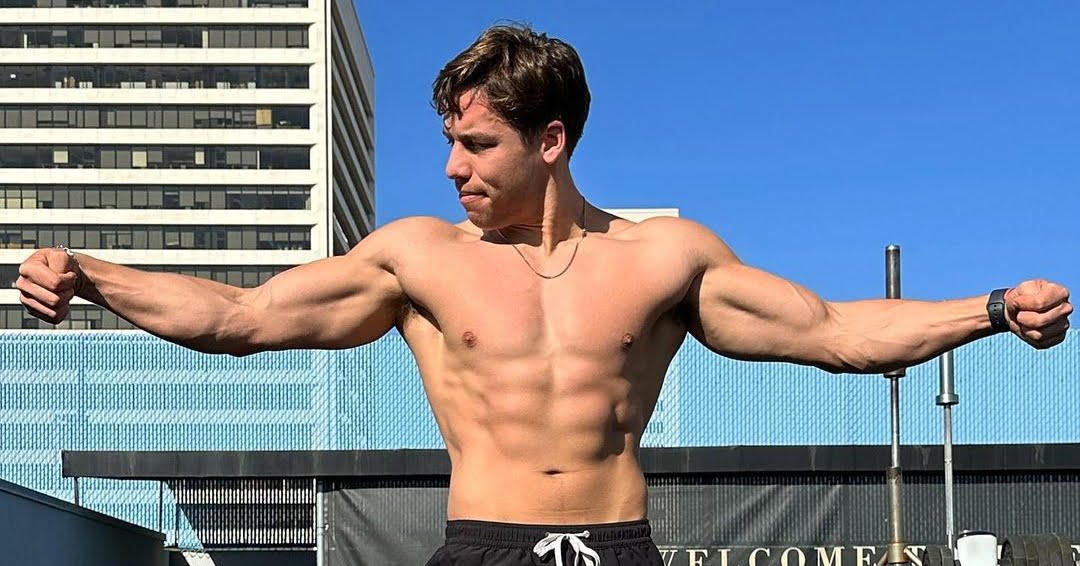 Arnold Schwarzenegger’s son Joseph Baena shows off his incredible physique, as he looks just like his father, recreating the famous Mr Olympia poses.

The identity of Arnold’s secret son was kept under wraps for 15 years. However, as the news came out of Arnold’s rumors of an affair with his housekeeper, the actor came forward to confirm those and reveal his identity.

Ten years on, Arnold has been seen spending time with his son, who looks just like him. Joseph, who goes by Joe, has followed his father’s footsteps in building his physique – almost like Mr Olympia.

Celebrating the Thanksgiving weekend at the outdoor gym, he captioned: “Too much turkey.”

Not only does he look like his father, but they both share the same hobbies, such as working out. In the 1960s, Arnold drew attention for his ripped figure, which is the same path Joe follows nearly six decades later.

One said: “So cool having studied your dad’s encyclopedia of modern bodybuilding back in the day, and here you are next generation living it. Fantastic physique!”

A follower asked: “Any plans in the future for competing in Mr Olympia?”

A fourth one commented: “You are amazing. In the first photo, I thought that [was] your father.”

A ‘secret’ son with a housekeeper

Arnold is a proud father of five children, four of whom he shares with his ex-wife Maria Shriver. Joseph, the youngest of them, came after having an affair with his housekeeper – which he denied but later admitted to, writes CNN.

Joe was born to Arnold’s former housekeeper, Mildred Baena, who worked for two decades for the family. He was born days after his son Christopher.

The two had a secret affair in 1996 while the family went on a vacation, and he stayed home to shoot a movie. Although the actor was convinced he was not Joseph’s father, he later realized that he bore an uncanny resemblance to him.

Despite the big surprise, the LA times reported she “left on good terms with them” and received a severance package. Joe’s identity was kept a secret for 15 years.

Arnold wrote about the affair in his book Total Recall: My Unbelievably True Life Story.

He said: “The minute we sat down, the therapist turned to me and said, ‘Maria wanted to come here today and to ask about a child — whether you fathered a child with your housekeeper Mildred’.”

Arnold also issued an apology to his wife and children when the news broke out via the LA Times. He said he was “truly sorry” for what had happened with Mildred.

A good father-son bond where they ‘joke about everything’

Joseph and Arnold have a good relationship, with the 75-year-old occasionally seen on his Instagram feed.

Despite their bond and his own career as a real state agent and an actor, Joseph decided to go by his mother’s surname instead of his dad’s famous surname to secure jobs.

Growing up with his mother, the 25-year-old confessed during an appearance at the UNWAXED Podcast to have been ‘nervous’ the actor would walk away from him. Although, it ended up becoming the opposite.

“I grew up with my mom and I was always nervous and I didn‘t want him to think bad of me and be like, ‘what the heck is this guy doing? He‘s just partying all the time,’” Baena said.

“Now it‘s like awesome. I’m so close to my dad and we joke about everything.”

He then confessed his relationship with his father “took a little while”, but are very close that he can “joke around him and joke about anything”.

Have something to tell us about this article?

Ashley is a journalism graduate from Kingston University, currently writing for HITC, Reality Titbit and The Focus. She loves to travel and learn new languages and cultures. She also has an interest in celebrity news and the entertainment world. When she’s not writing, she’s on social media, watching K-dramas or shopping.